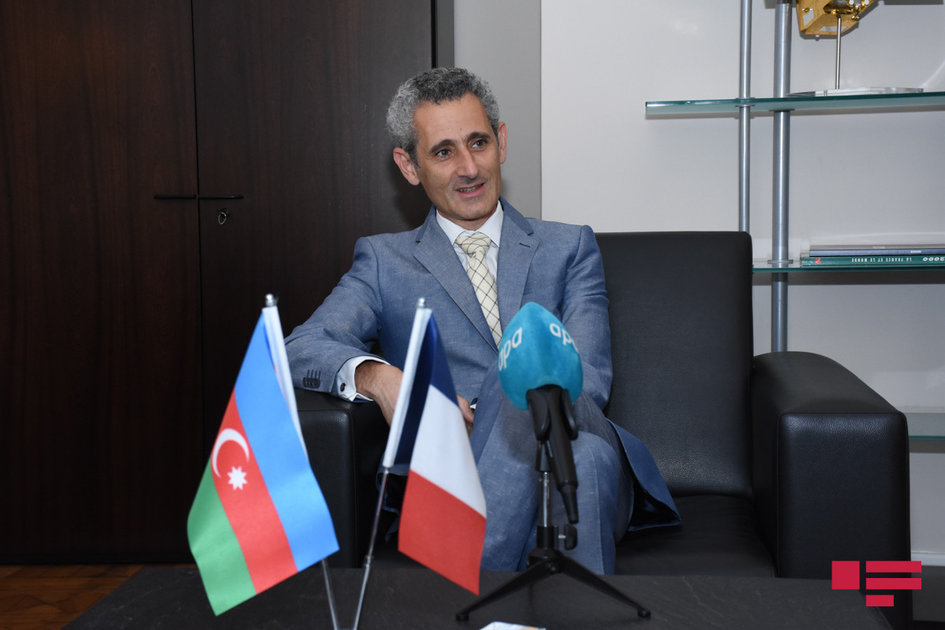 You say there is a cooling of relations between Azerbaijan and France. I’m not convinced this is the case. There may have been some tension during and after the recent war but fundamentally, the position of French government remains unchanged, meaning that France believes in the importance of the independence and prosperity of Azerbaijan to achieve a stable and secure South-Caucausus.

Constructive bilateral dialogue has continued over the last months. President Macron phoned President Aliyev in January. Minister Lemoyne was in Baku at the end of January. A group of French Senators and Members of Parliament visited Baku in February. Senator Nathalie Goulet visited in May and the Diplomatic Advisor to the 1st Vice-President, Ambassador Elchin Amirbayov held a series of consultations in Paris only a few days ago.

As for the bilateral tension, it is not surprising because the stakes are high during a conflict and in a post-conflict period. But I notice there have been signs of tensions in the relations of Azerbaijan with other important players, such the Russian Federation, the USA, Iran and a number of European countries. But it is a sign of the strength of the relationship between France and Azerbaijan that both sides have sought to overcome these tensions. In fact, France is accused of being pro-Armenian, wouldn’t it be in France’s interest to take a more balanced position as a mediator between the conflict parties ?

Azerbaijan is a party to an age-old conflict with Armenia. France is not party to this conflict and has nothing to do with the roots of this conflict. But we do hope to see an end to it.

France wants to have friendly relations with all three countries of the South-Caucasus. Why shouldn’t we ? We have no hidden agenda in this region. But because Armenia and Azerbaijan are still in a state of mutual antipathy, there is criticism of France from both sides – criticism from Azerbaijan when France expresses its sympathy for the plight of Armenians and criticism from Armenia when France expresses its sympathy for the suffering of Azerbaijanis.

This in fact goes to show that there are still many issues that need to be resolved, concerning the implementation of the Statements of 9th November 2020 and 11th January 2021– from the release of detainees, to the access of UN organisations to the field, to regional connectivity and the unblocking of transportation routes. More broadly there are security issues, such as the demining of the region and, at the end of the day, there are issues of reconciliation that will require a political process. France and Germany have an important historical experience in this area.

Interestingly, some people are happy to attribute to France positions that are in fact well-shared positions of much of the international community : for instance, the request to free Armenian detainees is one that has been voiced by all of the co-chairs of the Group of Minsk and several EU member states. The same goes for co-chairs and UN humanitarian agencies’ requests for access to the Russian controlled areas of Karabagh. These are international requests not only French.

So to answer your question, I think France maintains a balanced position and is willing to pursue its efforts as international mediator, with the other co-chairs of the Group of Minsk of the OSCE, which I believe can only be beneficial for Azerbaijan and Armenia. This may not be fully apparent today to all Azebaijanis, but over time I believe many will come to see this.

Given the changing geopolitical situation, new dynamic in the region, will we see new elements in France’s foreign policy towards the South Caucasus in future ?

France has been active in the South Caucasus and will remain so. We were the second country to recognize the independence of Azerbaijan, after Turkey. We have strong political ties with Azerbaijan – I don’t think there is a European or indeed Western leader that has been more involved in dialogue with President Aliyev than President Macron over the last year. He has done so always in a friendly spirit and with good will, with a positive agenda. I believe Azerbaijan’s leadership understands and recognises this.

Certainly, I think the new context, one where Azerbaijan considers that its conflict with Armenia is over and where it is ready to engage regionally offers opportunities. At the same time, I think it is clear there are still issues to be solved in the region– political, humanitarian, economic and cultural.

And France is well positioned to develop an integrated South-Caucausus policy in all of these areas. France is already a significant political, cultural and business partner of Azerbaijan, as it is of Armenia and Georgia, and will remain so. At least that is what I hope and think would be most beneficial for our countries.

Just to take one example, France is already a major investor in Azerbaijan’s infrastructure and connectivity programme. France’s development Agency AFD has invested 288 M euro in Azerbaijan’s railways ADY, for the modernisation of the tracks from Baku to Tbilissi and from Astara to the Russian border, as well as in the streamlining of ADY. AFD stands ready to double its investment in Azerbaijan, bringing it to 600 M euros, in the field of transport, water, green energy, etc. France would be keen to work in theses with the European Union and other international investors and together this can make a positive difference for the future of Azerbaijan and the region. During his visit to Azerbaijan in January, Secretary of State for Foreign Affairs of France Jean-Baptiste Lemoyne said that France, as a Co-chair of OSCE Minsk Group, would contribute to post-war activities. 4 months after this statement has any steps been taken by France in this direction ?

One area where we are in talks with Azerbaijan is demining. I have met several times with the head of ANAMA to define a bilateral programme of cooperation. France is ready to provide assistance in this field, including in terms of protection equipment for deminers and assistance to victims of mines. The task is enormous. The area that needs to be demined is larger than the demilitarized zone between North and South Korea ! The number of victims is already high, more than 100 deaths and wounded, including the recent deaths of two journalists and a representative of local government. This is very sad and I have expressed my condolences to their families.

I think this cooperation project is important, to save lives and to allow the future return of internally displaced persons (IDPs).

This is not the first bilateral humanitarian project we have. For instance, the Embassy organized the visit in last November of a team of four French surgeons who worked at Baku’s hospital number one, to treat the wounded of the war and to share their specialised medical experience, since France has developed a lot of experience in the field, including since the terror attacks in France of 2015. It was a very positive project for both sided.

There are countries that have already expressed their interest related to liberated lands of Azerbaijan, in terms of participation of reconstruction process. Companies from these countries wanting to involve in reconstruction process are negotiating with Azerbaijan’s government to get acquainted with opportunities and offer their skills. Have French companies expressed their interest in this regard and are there any proposals ?

Business is independent from politics because what the market needs is always the best solution at the best price. Many French companies are present in Azerbaijan and keen to pursue their work with their local clients, in the field of water management, renewable energy, local transport, electricity production, agriculture and smart cities, not to mention luxury goods.

But to answer your question, minister Lemoyne made it clear during his visit in January that there is no political obstacle to the participation of French business in the reconstruction process. Cooperation between Azerbaijan and France in the field of education is successful, UFAZ, French high school, exchange of students and etc. Is there new projects in this area for future ?

I am very happy that since last September UFAZ has opened three Master’s courses in chemistry, oil and gas engineering and computer sciences, in addition to the existing Bachelors courses. UFAZ already has more than 600 students and we want this to continue to grow.

Beyond this, in next September Baku State University will be opening a new Master’s course in the field of protection of intellectual property, with the University of Lyon II, and will deliver a double diploma which I am sure will be very attractive on the Azerbaijani and international work-market. The course will be taught in English and French which is a great combination.

I would also like to see more Azerbaijani students choose France for their higher education projects. There are more than 1000 university courses taught in English in France so the choice is very broad, even without speaking French. The French Embassy continues to deliver grants to students from all over Azerbaijan and has never stopped delivering visas to students. So considering the excellent quality of French higher education and the very reasonable prices charged by French Universities, I think there is every reason to see growth in our bilateral cooperation in this area.

Anyone interested can contact Clemence Phelippeau, our university cooperation officer at the French Embassy in Baku (clemence.phelippeau@diplomatie.gouv.fr).

And my final question, what should be done, what efforts should be put in order to be further strengthened relationship between France and Azerbaijan ?

I think we should consider a special cultural event to celebrate the 30th anniversary of French-Azerbaijani diplomatic relations next year. I have a few special ideas that I am keeping secret for the moment but hope to be able to announce soon !